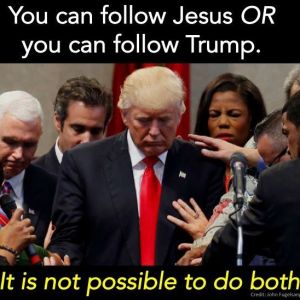 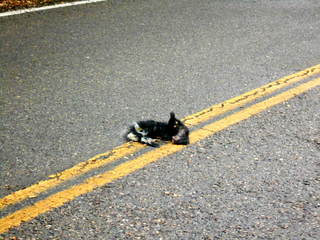 I am a dying breed. I still consider myself a George H W Bush Republican. But my party has gone way off track. I am a moderate independent. I don’t fit into either parties right now and I don’t think Christians should. If we do. We let political dogma guide our actions and not the Lord.

Now I have been told the only thing in the middle of the road are dead skunks an yellow lines as Jim HighTower says it. I disagee. If we are going to use a highway analogy. I will use a different one. Your a kid traveling with your parents. Let’s say the mom is the democrat and the dad is the Republican. If the driver drives straight the family will get to their destination. The family is driving over a bridge. The mom drives too far to the left the car goes off the embankment crashes into the river below and all die. The dad drives to far to the right and the car goes off the embankment and everyone dies.

We the United States population are that kid in the backseat listening to our parents fight and leading us off to die. One child may be desperately trying to get them to find some middle ground. Another child may not be paying attention but looking at his or her smart phone reading the latest on Bradgilina. The youngest kid may be hitting his head against the window shaking and saying “please make it stop” and secretly wishing the car would go off the embankment and end his or her emotional pain.

That is where we stand. And we wouldn’t be at this point if we just listened to each other and went back to the give and take of politics.

Immigration: have a path for citizenship for illegal immigrants with children who were born in the United States but deport single illegal immigrants. And put up better border control so that any illegal crossing over after the date the bill is signed is automatically sent back unless he can prove that going back would be a death sentence.

Guns: have a ban on semi- automatics and have better background checks. But make it in clear writing in the bill. That regular rifles, shotguns, and handguns are off the table. They will never be banned.

Homosexuality. This is where my liberal friends and I disagree. I actually believe that state’s should be able to decide if they would allow gay marriage or other rights. Here me out. I support same sex marriage. It is better to live a life of love and commitment than not. But forcing all stated to do so only feeds into the religious right’s paranoia.

We saw what happened in Indiana and what is happening in North Carolina. North Carolina is becoming a pariah state. They are losing millions of not billions of dollars. This will not sit well with the monied interests and they will switch sides on this issue.

This is not the same as 1960s Deep South. First of all most of Northern America didn’t care about what African Americans were going through. That is not the case. The majority of American people supports same sex marriage.

Also we have a global economy. These companies will decide not to build new plants in these pariah states. Companies may even close down factories and move their home bases because people would boycott their products.

Making it a fiat from on high was not the way to go about it.

Anyway. I am done with that rant.

If we err of the narrow path we will lead to nothing but trouble.